Last Summer 2008 our AALEAD Bancroft students had a fund raising event called “Kids for Kids project” to raised money to support the poorest of the poor children in the Philippines to go to school. Our students were able to raise almost $200 to support Filipino students to school. Our staff & students were encouraged that even in a small way they were able to help those less fortunate children in the Philippines. 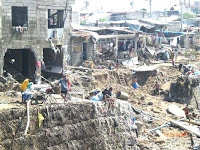 When Typhoon Ketsana , also known as Ondoy, hit the Philippines, one report described it as the following: “On September 26, 2009, Typhoon Ondoy brought a month's worth of rainfall to Metro Manila and nearby areas in just a few hours, causing severe flooding which resulted in the loss of many lives and the displacement of hundreds of thousands of people. 8 days later, Typhoon Pepeng struck the northern regions causing more damage.”

We learned from the organization that we supported that many of the students whom we supported were also affected by the typhoon. Our students & staff had a meeting on what can we do to help these poor communities again.
Even with the limited resources of low income families; we all agreed that if we are determined to help others with even the little we have , we will never know what impact that may result. 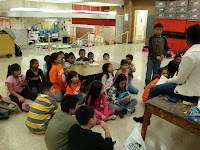 So we started our “Pennies for the Philippines” project, using an old water gallon as our community bank. Our students began bringing their pennies and even asking friends and parents for their pennies to contribute. This project ran for one month of carefully saving these precious pennies. After counting them, our students were able to raise $105 in just one month! With this small fund, we provided ten families affected by the typhoon wonderful Christmas gifts of much needed groceries. 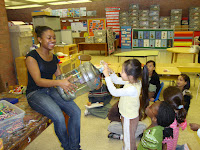 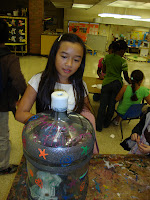 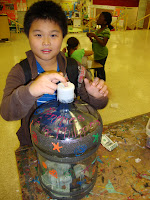 Here is what the Founder of the organization sent our students and staff:

Staff & Students
Bancroft Elementary School,
Dear Friends,
I am writing to you on behalf of Dawn for the Poor to thank you for your generous participation in “Pennies for the Philippines” for our flood relief program for the families in Marilao, just north of Manila, Philippines, who lost so much during the devastating typhoon and floods in their area.
My wife and I were able to visit Marilao after the typhoon to give out some relief goods and encouragement to the families there. Some of the families who were most impacted by the floods had nothing to look forward to at Christmas time. But through your kindness and generosity some of our workers in Marilao were able to give them some funds for food and gifts for Christmas.
Thank you for making their Christmas a memorable one!
We are so encouraged by your love and concern for the poor and the suffering.
God bless you all.


Posted by Asian American LEAD at 8:39 AM